A Song Coming On with John Carpenter 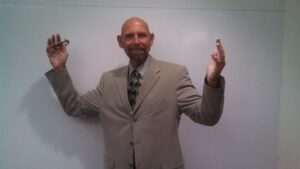 Join us for a song-writing workshop with Dr. John Carpenter!
Dr. John Carpenter is a professor at Indian River State College, where he has taught writing and English Literature classes for almost fifteen years. He has also taught at the University of South Carolina, where he earned a Ph.D. in Renaissance drama and Medieval poetry and a Master’s Degree in Library and Information Science.
Dr. Carpenter has worked as a professional musician for the last forty-plus years, having
played guitar and sung in many different musical performance genres, written music for television,
and been a lead guitarist on many recording sessions. For the last seven years, he has played, co-
written, and sung in the Vero Beach-based band, Souljam, with whom he has released two albums.
Additionally, he has written over six hundred songs since 2009, in addition to having co-written with
Nashville-based songwriters and released several solo albums.
IF you are an LRJF member, please call or stop by our office to get your discounted $35 ticket for the workshop! 772.569.6718
PLEASE BE SURE TO ADD AT LEAST ONE TICKET TO THE CART TO BE ABLE TO PURCHASE. IF YOU LEAVE THE TICKET COUNTER AT 0 YOU WILL NOT BE ABLE TO PURCHASE A TICKET.